The management of SUSPA GmbH

Oliver Gold has been part of the management of SUSPA GmbH since November 01, 2016 and in this role is mainly responsible for the operational business in the automotive field.

Oliver Gold was born in Kitzingen in 1963. After completing his degree as a graduate industrial engineer (university of applied sciences) in Schweinfurt in 1988, he went to the USA on a Fulbright scholarship and continued his studies for 2 years at the University of Cincinnati (Ohio) with a Master's of Business Administration (MBA).
After returning from the USA, he joined Robert Bosch GmbH, Stuttgart as a project manager in sales/development in the field of automotive engineering K9: starters, generators, batteries, with the task of establishing business with Japanese customers.

Oğuz Tekin has been part of the management of SUSPA GmbH on August 1st, 2020 and as such is responsible for finance, controlling, human resources, purchasing, IT and quality management.
He was born in Augsburg on October 20th, 1969 and studied electrical and industrial engineering. After completing his degree, he started his career in central controlling of Dorsch consult in Munich. He developed in companies with an international orientation from Head of Controlling to Managing Director and CFO with a focus on the commercial areas. In his previous positions, he was head of finance and controlling at Motoman Robotec (Yaskawa Group) in Allershausen, commercial manager at the Wieland Electric Group in Bamberg, board member and CFO at BMA AG in Braunschweig and managing director and CFO at the Vermop Group in Starnberg. Oğuz Tekin joined SUSPA GmbH in 2020 and has been with the company as Managing Director and CFO ever since. 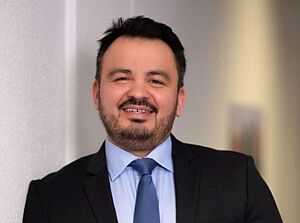 Since September 1, 2022, Ender Erat has been part of the management of SUSPA GmbH and in his role is mainly responsible for the business segment Mechanical Applications.

Ender Erat was born in Altdorf near Nuremberg in 1977. While studying Business Administration at the University Erlangen-Nuremberg, he has been with SUSPA from1997 until 2010.